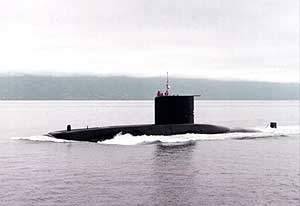 209 Class, 1400-L Type submarine built for the Chilean Navy at HDW Shipyards in Kiel, Germany since 1980. Launched on May 7, 1984 when the national flag was raised. Mrs. Berta Undurraga acted as her sponsor and her first Commander Officer was Captain Roman Fritis Perez.
Arrived at Chilean port on August 21, 1984 and was immediately incorporated to the Submarine Fleet of the Chilean Navy.
Named after the Frigate Captain Manuel Thomson Porto Mariño, hero of the Chilean Navy who died being the Commander of the Monitor Huascar, on February 23, 1880 during the Arica Siege, on the Guerra del Pacifico (Pacific War).
During her 16 years of service, the Submarine Thomson has taken part in eight UNITAS operations. In 1994, she visited the United States and Canada to participate in the Black Operation, together with the Naval Forces of Canada, Great Britain and the United States, sailing 14309 miles, 11636 of which she sailed submerged.