A+ A-
The Defence Vector
The International Vector
The Maritime Vector

The Navy's actions and its role in the international realm form the basis of the Three Vectors Naval Strategy. The objective of this strategy is to obtain control of the sea so that, during times of conflict, or peace the Armed Forces may act freely and Chile's maritime activities may take place without interference or restrictions.

These three vectors, Defense, Maritime and International, are all inter-connected and complement each other. They aim to protect Chile's sovereignty and it's territory thus controlling and supervising Chile's maritime areas and promotes Chile's maritime interests worldwide.

This vector aims to develop Chile's strategic capabilities to defend its sovereignty and territory. In conjunction with the other branches of the Armed Forces the Chilean Navy is an excellent deterring instrument to safeguard Chilean sovereignty and territory. This strategic component acts as a part of crisis management and may if necessary, deal with low, medium or high-intensity conflict.

This vector is associated with Chile being a part of the international effort to maintain world order and stability. From a multilateral perspective it cooperates closely with other countries. Participatory responsibilities include: peace support and humanitarian operations; showing the flag; participation in combined exercises; interchanges at professional, sporting and social levels and the development of other initiatives promoting mutual trust.

This vector is related to Chile's extensive maritime areas so as to promote its maritime interests from a socio-economic perspective thus connecting the Navy to civilian part of society. Maritime activities include the following important responsibilities: the protection of human life at sea including the prevention and combating of pollution, maintenance of maritime navigational aids, meteorological support, coastal communication, support to isolated zones, scientific marine investigation, the promotion of water sports and shipbuilding (ASMAR). 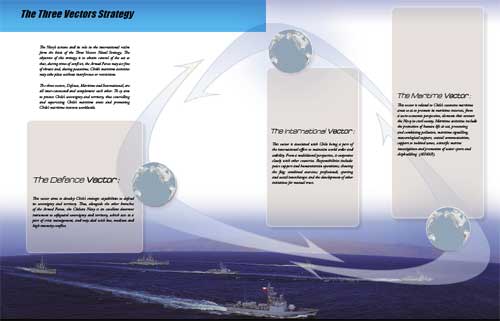