The Navy: presence from the beginning of Chile’s History

A+ A-
A History written by the Navy people

he beginnings of the Chilean Navy dates back to 1818, the same year that Chile was proclaimed an independent nation. A year before, following the Battle of Chacabuco, General Bernardo O'Higgins prophetically declared "this victory and another hundred shall be of no significance if we do not gain control of the sea. 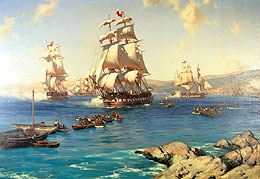 This led to the development of Chile's Naval Power, and the first legal resolutions outlining the organization of the institution were created. Chile's First National Fleet and the Academy for Young Midshipmen (predecessor of the current Naval Academy), were founded, as were the Marine Corps and the Supply Commissary.

A History written by the Navy people
subir

The Chilean Navy's lifelong allegiance to its country has been shaped throughout the years by notable men who, when needed, have been ready to give their lives.

The most outstanding example of this commitment is that of Commander Arturo Prat, whose name went down in history on the 21 May 1879 for his exceptional heroism demonstrated on that day at the Naval Battle of Iquique,  during the "War of the Pacific" against Peru and Bolivia.

Prat, while in charge of the fragile corvette "Esmeralda" and despite the inferiority of his own forces, fought to the end against the imposing Peruvian ironclad monitor "Huascar". He valiantly chose to give his life alongside his crew rather than surrender his ship to the enemy,

Prat's act of bravery is commemorated every year on 21 May, the only national holiday in Chile to recall a military feat. On that day, the country pays tribute to the courage shown by Prat and his men, whose deeds motivated the nation and it's military forces to victory of the "War of the Pacific".

Throughout Chile's naval history, other outstanding individuals have nevertheless also contributed great deeds towards the development of our Naval  Institution making it the proud and reputable institution it is today.