On an international level, the Navy's main challenge is to integrate today's globalized world. With 80% of total foreign trade carried out by shipping, the Chilean economy relies on appropriate maritime trade routes that enable the efficient flow of passengers, services and goods. There is therefore a very real need for the formation of a cooperative security system between nations with common interests so as to preserve world peace and stability. Just as Chile is open to accepting the benefits of globalization, it must also be willing to participate in the efforts necessary to attain stability and order at a global level. The Navy, together with its human and material resources, is always ready to do what is necessary in the interests of the nation.

The Chilean Navy actively participates with other Navies of the world in combined exercises that genuinely and efficiently put into practice a shared interoperability, doctrine and procedures aimed at counteracting the new so-called "asymmetric threats" stemming from the high seas, such as terrorism, drug trafficking and illegal immigration.

The Presence of the Chilean Navy in the World
subir

As part of its international commitments, the Navy participates in cooperation programs with other nations. 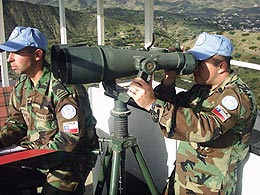 Under the tutelage of the United Nations, Chile's Navy embraced the stand-by arrangement, whereby States always have permanently prepared resources on stand-by, including trained troops that are capable of working together with foreign forces.

Humanitarian aid in the case of natural disasters.

Mutual Trust
The building of reciprocal bonds of trust, particularly with neighbouring countries such as Argentina and Peru, by the strengthening of operational, technical and human ties, by means of exercises, formal visits, and professional and educational exchanges.

UNITAS Pacific Phase
The UNITAS naval exercises with the United States were established in 1959 and are currently carried out on a multilateral basis with Naval forces from various South American countries. 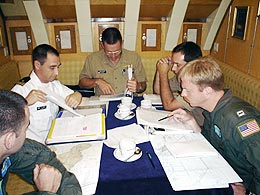 The most important combined naval exercise in the Pacific Ocean. Under the coordination of the U.S. Third Fleet, RIMPAC began in 1971 and since 1974 has been carried out biannually in Hawaii. The exercise brings together the forces of Australia, Canada, Chile, the United States, Japan, Korea, the United Kingdom and Peru, the latter becoming involved in the last operation. Chile has been a participating member since 1994.

Team Work South
Coordinated by the Chilean Navy, this multinational naval exercise brings together the largest quantity of troops, ships and aircraft in the country. It began in 1995 in northern Chile and since 1999 is held on a biannual basis, every odd years. It brings together forces from Canada, Chile, France, the United States and the United Kingdom, and includes the Chilean Air Force.

MARCOT
(Maritime Combined Operations Training) Multinational naval exercise coordinated by the Canadian Navy. It takes place in Canadian waters, in the Pacific Ocean, and is aimed at training multinational forces that operate with the United Nations. It brings together forces from the Australian, Canadian, Chilean (since 1995), U.S. and British Navies.

Team Work North
This multinational naval exercise is coordinated by the U.S. Third Fleet and is organized together with the Chilean Navy. It has been held since 1996 on the U.S. west coast off California. Participating nations include Chile, the United States and is also expected to include Canada.

Panamax
Interoperability exercise aimed at guaranteeing the defence and security of the Panama Canal. Held since 2003, Panamax is conducted under the direction of U.S. Naval Forces Southern Command, the Chilean Navy and Panama's Maritime Service.

Integration
Since 1998, in the context of the rapprochement policy and mutual understanding measures developed with Argentina, the Chilean Navy has also carried out bilateral exercises with this country.

Pacific and Neptune
Bilateral exercises held in the maritime zone known as "Northern Chile / Southern Peru". They are aimed at strengthening relations between the Navies of both nations as well as reinforcing their capability to efficiently and effectively employ resources to protect human life at sea. The Pacific exercise provides training in the tactical area between ships from both Fleets. Neptune focuses on maritime issues and the prevention of contamination in ports.

Bogatun
Bilateral naval exercise between the navies of Brazil and Chile carried out since 1996 in waters pertaining to each nation.

Marara
Exercise that trains French and Chilean forces in support situations to deal with catastrophes and humanitarian aid in Polynesia.

Viekaren
A security and mutual trust exercise that is carried out each year in the southern region between units from the Chilean Navy and the Argentinean Navy. 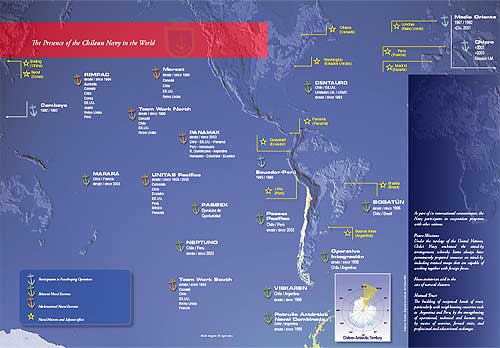