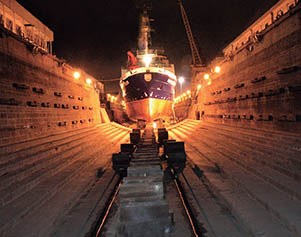 After the First National Squadron was created, during the years that followed the Chilean Independence, the Navy made a great effort to build their own shipyards and workshops, first in Valparaíso in 1817 and, then, in Talcahuano since 1895. Over time, these facilities have developed and consolidated to become what they are today as the Astilleros y Maestranzas de la Armada, ASMAR.

The shipyard has operated as an enterprise separated from the State with a legal structure since 1960 and, nowadays, it has three industrial plants in Valparaíso, Talcahuano and Punta Arenas. However, the three shipyards have achieved a national and international prestige over time. They are open and offer their capabilities for building and repairing Chilean and foreign units.