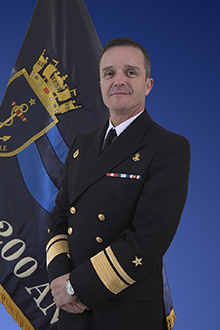 Rear Admiral Ábrego was born in Talcahuano on April 11, 1966. He completed his basic studies in Viña del Mar y Talcahuano and his Secondary Studies in Punta Arenas at Liceo Salesiano San José to later join the Naval Academy.

He graduated from the "Arturo Prat" Naval Academy in December 1986 as Infantry Midshipman in 1987. He graduated from his Infantry specialty courses in 2005. He was awarded his Masters in Naval and Maritime Sciences by the Naval War Academy. He also has a Diploma in Defense Project Management obtained in 2002 and a Diploma in Top Management obtained in 2013.

In 2007, he graduated from his Staff Course at the Air Force War Academy.

During his career, he has been posted to many different battle stations and positions, leading infantry units at the Marine Infantry Detachment of the Chilean Navy No.2 "Miller" in Viña del Mar; No.3 "Aldea" in Talcahuano, and No.4 "Cochrane" in Punta Arenas. Among his roles he was a Logistics Officer, Telecommunications Officer and Operations Officer. At the General Command of the Infantry Corps he was the Military Head of the department and Head of the Project Department.

During 2010, he was posted to the Command in Chief of the Second Naval Zone, working as Head of the Department of Personnel. Later that same year he was appointed Commander of the Battalion Chile and he was deployed to the UN Haiti mission to Stabilize the country during the first semester.

During 2011, he was appointed Commander of the Infantry Detachment No.4 "Cochrane" until 2012, when he was promoted to the rank of Captain on the 1st of January. During 2013, he was Chief of Staff of the Infantry Corps.

During 2014 and 2015, he was the appointed Naval Liaison and Defense Officer on Behalf of the Southern Command of the US. When going back to Chile he worked as Commander of the Brigade Command and Second in Command of the Amphibious Expeditionary Brigade.

On December 6, 2017, he was appointed Commanding General of the Infantry Corps and Commander of the Amphibious Expeditionary Brigade.