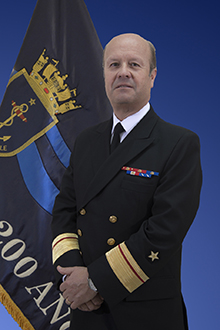 Rear Admiral Kretschmer was born in Viña del Mar on November 14, 1956. He grew up in La Serena and was educated at Liceo Blanco Encalada de la Salle, in Talca.

He studied medicine at the University of Chile, graduating as a medical surgeon in December 1980.

He joined the Chilean Armada on February 15, 1981, with the rank of lieutenant (junior grade) of health services. Between 1987 and 1990, he completed his residency in orthopedics at the University of Chile, for which he received a scholarship.

From April to June 1990, he undertook an internship in the orthopedics unit at La Fe Hospital in Valencia, Spain.

He received a diploma in healthcare management, participated as an ATLS instructor at the American College of Surgeons (1997), and was associate professor of orthopedics at the University of Valparaíso (2005).

Among his posts at sea include a tour on the training ship Esmeralda in 1984 and as fleet surgeon in 1999.