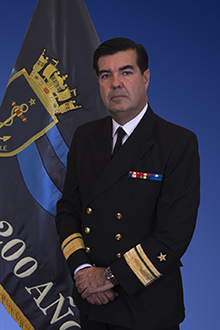 Rear Admiral Araya was born on November 30, 1962 he took the Officers Service Course in 1987 and he graduated as Lieutenant (Judge Advocate).

In 1986, he graduated as Bachelor in Legal and Social Sciences in Pontificia Universidad Católica de Valparaíso, he was granted the title of lawyer by the Supreme Court of Justice later that same year. In 1997, he took a course in Law and Armed Conflicts in the Red Cross International Committee and in 1998 he took the Information course of the Staff.

On December 4, 2013, he became the Naval General Auditor and Minister at the Martial Court of the navy.

On January 1, 2014, he was promoted to Rear Admiral Judge Advocate.