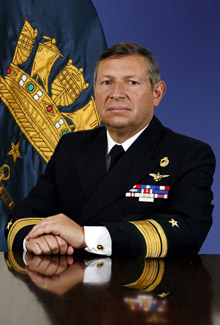 Rear Admiral Espinosa was born in Valparaiso on 17th September 1958. He entered the Naval Academy "Arturo Prat" in 1973 and was commissioned an Ensign on 1st January 1978.

His air naval career has mainly taken place at the VP-1 Air Maritime Patrol Squadron, being Aircraft Commanding Officer and Instructor C-95, P-111, Westwind II and P-3ACH models. In 2000 he was Commanding Officer VP1 Squadron and from 2006 to 2007 Chief of Staff, Naval Aviation Command.

Amongst his shore duties, we can underline his performance as Defense, Naval, Air and Military Attaché to the Chilean Embassy in Seul, Southern Korea from 2003 through 2004.

On 28th December 2007 he was promoted to Commodore.

He is married to the former Macarena Acosta and they have four children: Jaime Antonio, Beatriz, Macarena and Juan Pablo.