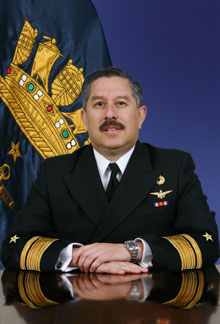 Rear Admiral Ojeda was born in Valparaíso on 1st April 1958. Before entering the Naval Academy, he studied at the Saint Peter's School in Viña del Mar.

He graduated from the Naval Academy "Arturo Prat" on 18th December 1976. He took the instruction cruise on board TS "Esmeralda" and in 1978 he was appointed Head of the Operations Department in LSM-94 "OROMPELLO".

In 1979, as Ensign he took over as Commanding Officer WPC-76 "ODEGER", with primary port in Puerto Montt.

In 1981 he majored in Naval Aviation at the Air Naval Station "El Belloto", being then posted to the Antisubmarine Helicopter Squadron HS-1, filling different positions.

As from 1982 to 1994, he performed as Helicopter Pilot on board different Fleet Units, amongst them, DD "PORTALES", PFG "CONDELL" and DLH "COCHRANE".

From 1987 to 1990, he filled General Service duties on board PFG "CONDELL", highlighting: Chief of the Operations Department, Operations Officer and Principal Warfare Officer (PWO) of the mentioned Fleet Unit.

In 1990, he was posted to the Naval War College, where he took his first year of the Staff specialty course.

In 1991, he studied to become an Aircraft Commander, Instructor and Helicopter Tactical Coordinator officer SH-32 in France. From 1992 through 1994, he was Executive Officer of the HA-1 "Strike Squadron", Pilot Instructor and TACCOS.

In 1995, he commanded PSG "CONTRAMAESTRE ORTIZ", with primary port in Arica. In 1996 and 1997 he became Executive Officer of the "Viña del Mar" Air Naval Station.

In 1996, he was qualified with a Diploma in Administration and Finance from Universidad Maritima and in 1997 he followed the second year of the Staff specialty course at the Naval War College.

In 1998, he was posted to the Command in Chief Staff and to the Fleet Training Command.

As from 1999 through 2000, he took over as Commanding Officer at LM-30 "CASMA", with primary port in Talcahuano and Puerto Williams, respectively. Then, in 2001 he was appointed Commander, Southern Strike Command in Punta Arenas, and from 2002 through 2003 as Commander of the Chiloe Naval District in Puerto Montt.

From 2004 through 2005 he performed as Head Planning Department, Directorate General Maritime Territory and Merchant Marine and as of 2006 to 2007 he took over as Deputy Director.

On 12 December 2007 he was appointed Commander in Chief Third Naval Zone.

On 1st January 2008, the Supreme Government promoted him to Rear Admiral.

Rear Admiral Ojeda is married to the former Maria Carolina Campos and they have two children: Francisca and Rafael.