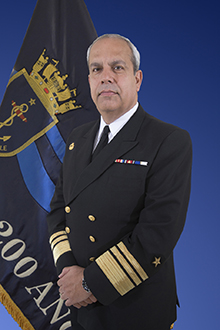 Vice Admiral McIntyre was born on August 25, 1962. He entered the academy in February 1978 and graduated as Midshipman in December 1982.

He is a specialist in missiles and artillery. In addition, he holds a postgraduate degree in business management from the University of Concepción.

As a junior officer he served aboard the training ship Esmeralda and several combat ships of the fleet, as Principal War Officer.

In 2001, he assumed command of the missile boat "Guardiamarina Riquelme", a post he occupied until December 2002.

In 2007 he assumed command of the frigate "Almirante Riveros". Between May and August, 2008, he deployed with his ship to the United States in order to participate in the RIMPAC exercise in Hawaii.

Between 2011 and 2012, he occupied the position of naval and defense attaché to the United Kingdom, Netherlands, Sweden, and the Republic of Ireland.

On November 18, 2013, he was sworn in as commodore and became director of Ship Maintenance and Material Management of the Navy on November 29 of that year.

On June 14, 2017 he was appointed Commander of Naval Operations.

On December 1, 2017, he was promoted to the rank of vice admiral by the Chilean government.