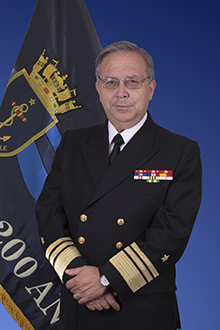 Rear Admiral Ramos was born on October 25, 1962. After completing his studies at the Colegio Seminario Pontificio Menor in Santiago, he entered the Arturo Prat Naval Academy, graduating as a midshipman on January 1, 1983.

In 2000, he completed a course in chief of staff and the following year he received a diploma in theory and methods of political analysis, both from the Naval War College.

He has served in several significant roles and destinations. In 1984, he was a member of the crew of the submarine mothership Angamos and of the training ship Esmeralda the following year. From 1989 to 1992, he was stationed at the Naval Telecommunications Center of Magallanes.

In 1995, he was named technical chief of operations of the Navy's Telecommunications and Information Technology Service and in 1998 he took over as head of the Networks Department there, where he developed several projects related to the telecommunications systems and computational networks of the Armada.

In 2008, he became assistant head of the Telecommunications and Information Technology Service. The following year, he was named project manager of the Directorate of Programming, Investigation, and Development. Through this role he participated in the Earth observational satellite system (SSOT) project, stationed in Toulouse, France in 2009 and 2010.

Beginning on December 29, 2010, he was Director of the Navy's Telecommunications and Information Technology Service.

On November 27, 2013, he took over as Director of the Directorate of Programming, Investigation, and Development.

On January 1, 2014, he was promoted to the rank of rear admiral by the Chilean government.