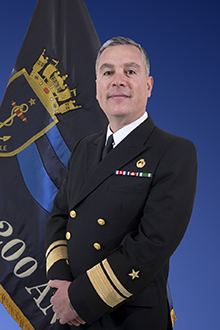 Rear Admiral Fernández was born in Viña del Mar in November 25, 1966. He graduated from the "Arturo Prat" Naval Academy in 1986 as Midshipman.

In 1992 became a graduate of the Naval Polytechnics School as Naval Electronic Engineer and in 2005 obtained the Staff Officer degree, at the Naval War College. In 2008 was assigned to serve in India, where he complemented his studies getting graduated from the Staff Course at the "Defense Services Staff College", and in 2009 earned a Masters in Science of Strategic and Defense, at the University of Madras.

At sea, he has served more than 15 years aboard several ships, Tallship BE "Esmeralda", Training Ship "Brasil", Staff Member of the Surface Fleet Squadron, Missile Boats LM "Chipana" and LM "Casma", FF "Baquedano", FFG 14 "Sides" (US Navy) and DLH "Almirante Cochrane". Holds a total of six years commanding ships, LSG "Quidora" in 2001, "Grumete Group" of patrol boats in 2002, LM "Orella" in 2006, and FF "Almirante Cochrane" from 2011 to 2013. In 2016 he got the assignment as Chief of Staff of the Surface Fleet Squadron.

At shore, he served as Technical Inspector for the former Directorate of Weapons, at the Fourth Naval Zone (1997 - 1998). Chief of Brigadiers Course, Chief of Navy Reserve Officers Course (Yatch) and Chief of Service Officers Course, all of them at the "Arturo Prat" Naval Academy (2003 - 2004). Senior Operations Officer at the Fourth Naval Zone (2007), Head of the Chilean Naval Mission in Washington and Naval Attaché at the Chilean Embassy in the United States of America (2014 - 2015). His latest assignment was Chief of Staff at the First Naval Zone and Commander of the Naval Base in Valparaiso (2017).

The Chilean Government promoted him to Rear Admiral December 29, 2017.