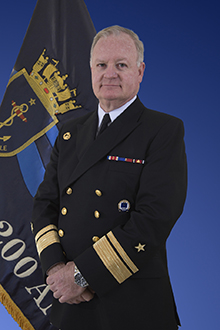 Rear Admiral Mardones was born on March 17, 1963 in Sewell, Chile. After completing his studies at SS.CC. Padres Franceses in Santiago, he entered the Arturo Prat Naval Academy, graduating as midshipman in 1984.

He is a specialist in chief of staff and navigation. He graduated from the United States Naval War College and attended the International Program of the Naval Command College. He holds a master's degree in naval and maritime sciences with a specialization in strategy.

During his more than 14 years of service on board, his participation in the Commission of the Brazilian Navy's training ship Custodio de Mello stands out. He served as navigation officer on AP-48 Aguila, DDG-18 Almirante Riveros, and PF-09 General Baquedano. He was a crew member on DLH-15 Blanco Encalada and commander of WPC-113 Castor, LM-39 Teniente Uribe, FF-15 Almirante Blanco Encalada, and the training ship Esmeralda, on this last of which he participated in the Bicentennial Regatta.

On November 24, 2014, he began his role as director of education of the Navy.

On December 5, 2016, he became Commander in Chief of the Squadron.

On December 7, 2017 he assumes as Commander in Chief of the First Naval Zone.