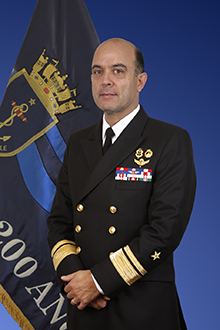 Rear Admiral Gonzalo Maldonado was born on August 13, 1964 in Valparaíso. After completing his studies at the Mackay School and the Seminario San Rafael, he entered the Arturo Prat Naval Academy, graduating as midshipman on January 1, 1985.

He is a specialist in chief of staff, navigation, and tactical diving. He holds master's degrees in naval and maritime sciences as well as in organizational management. He also holds the Chilean professional title of military professor in tactical diving.

During his more than 11 years embarked, he has served aboard the frigates Condell and Lynch, the barges Rancagua and Valdivia, and the training ship Esmeralda. He was commander of WPC Fuentealba and ATF Lautaro.

On December 5, 2016, he was promoted to Director of Education of the Navy.