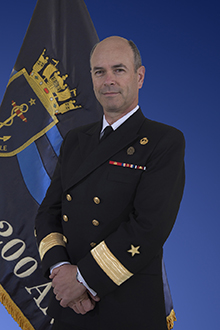 Commodore Navajas was born in Valparaiso on November 5, 1964. He completed his primary and secondary studies at Colegio Saint Dominic in Viña del Mar and the Lasalle College in Brasilia. Then, he entered the Naval school "Arturo Prat" in 1982, graduating with the rank of Midshipman in January 1987.

He has commanded the following units: LPC "Salinas", BRS "Slight", FF "Blanco Encalada" and FF "Almirante Williams". Among in land destinations, he has served in the Naval Weaponry School; At the Naval station of Puerto Montt as its commander and Chief of Staff of the Chiloé District; In the Navy training center; Embassy of Chile in Canada as defense attaché; In the Human Resources Directorate of the Navy; and as Human resources Director of the Navy.

Commodore Navajas is a specialist in Staff, with a degree from the Naval War College of the Chilean Navy. Also in 2009, he graduated from the course "Advanced Command and Staff Course" at the Joint Services Command & Staff College of the United Kingdom. He is also a Weapons Engineer, and has a minor in Artillery and Missiles.

In 1998 he graduated from the "Principal Warfare officer" course (PWO (U)) in HMS Dryad from the UK. He has the academic degree of "Master in Naval and Maritime Sciences", "Master in Industrial Engineering" at the University of Concepción and "Master of Art in Defense Studies" at Kings College in London. In addition, in 2017, he completed the Advanced Administration Program (AMP) at the University of Los Andes Business School.

On December 4, 2017 he assumed the position of Director of Programs, Research and Development of the Navy. On December 29th, 2017 he was appointed Commodore.