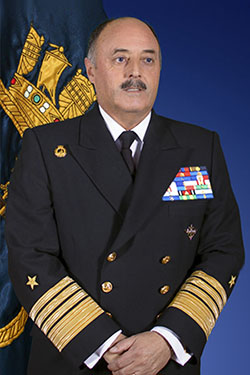 Admiral Larrañaga was born in Viña del Mar on January 3, 1959. After completing his studies at the Saint Dominic's School, he entered the Arturo Prat Naval Academy, graduating as ensign on January 1, 1977.

He is a specialist in chief of staff and navigational systems. He holds the professional title of weapons engineer, specializing in navigational systems, and a master's degree in naval and maritime sciences. He also holds the title of military professor of intelligence. He graduated from the Armed Forces Chief of Staff course in France in 1998.

During his more than 14 years of service on board, he served on the transport destroyer Orella, the destroyers Capitan Prat and Blanco Encalada, the missile frigate Almirante Lynch, and the training ship Esmeralda. He was commander of the missile boat Chipana in 1994 when it was stationed at the port of Iquique and of the transport ship Aquiles in 1999 and the training ship Esmeralda in 2002 with the home port of Valparaíso.

On December 21, 2006, he became the Navy's Director of Education and was sworn in as commodore on the 29th of that month. On December 19, 2007, he became General Secretary of the Navy, stationed in Santiago. On January 1, 2008, he was promoted to the rank of rear admiral by the Chilean government.

On June 15, 2009, in the city of Valparaíso, he was named Director General of the Maritime Territory and Merchant Marine. On January 1, 2010, he was promoted to the rank of vice admiral by the Chilean government.

On May 29, 2013, the President of the Republic designated him as the new Commander in Chief of the Navy, with the rank of fleet admiral. He assumed the post on June 18, 2013, beginning a constitutional period of four years at the helm of the institution.

He is married to Mrs. Jeannette Silva and they have four children, Enrique, Isabel, and twins Felipe and Sebastián.