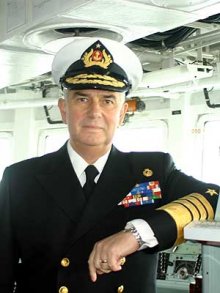 Admiral Codina was born in Valparaiso, Chile, on 03 July, 1949. He entered the Chilean Navy Academy "Arturo Prat" after attending the Padres Franceses School in Vina del Mar and Valparaiso, and graduated as Sub-Lieutenant on 01 January, 1969.

Throughout his more than fifteen years afloat, he has served on board DD "Almirante Blanco Encalada", DDG "Almirante Williams", CL "Capitan Prat", CL "O'Higgins", Training Ship "Esmeralda". He was Commanding Officer of the LST "Diaz" in 1971, LST "Maipo" in 1986, DHL "Almirante Cochrane", in 1994 and 1995 and Chief of the General Staff of the Fleet in 1996.

Among his shore duties, we can underline his responsabilities as Chief of the Executive Department of the Chilean Navy Academy, Deputy Director of the Naval War College. In 1997, he entered the Navy General Staff assuming as Head of Projects Division and Director of Planning and Operations in 1997 and 1998.

On 01 January, 1999, the Supreme Government promoted him to Rear Admiral and assumed as Commander in Chief of the Fourth Naval Zone located in Iquique. Additionally, he served as Naval Judge and General Commander of the Naval Garrison in Iquique.

On 01 December, 2001, the Supreme Government promoted him to Vice Admiral.

On 14 December, 2001, he assumed as General Director of the Maritime Territory and Merchant Marine.

On 21 December, 2004, he assumes the position of Commander of Naval Operations.

Admiral Codina assumed office as Commander-in-Chief of the Chilean Navy on june 18, 2005.

He is married to Gloria Macchiavello and have four daughters and three sons.