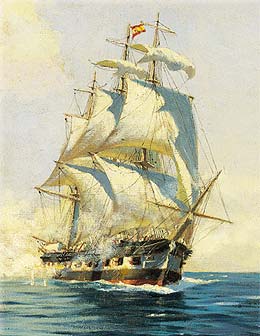 The name "Esmeralda" evokes two naval events that constitute true landmarks for the Chilean Navy; the capture of the Spanish frigate "Esmeralda", and the Naval Action at Iquique. These actions represent the most celebrated episodes of Chile's naval history, a time which bears witness to the love and sacrifice of her loyal crew and the development of values which to this day continue to be instilled aboard our ships.

In 1820, during America's emancipation from Spain, Chile sent a naval squadron, under the command of Admiral Lord Thomas Alexander Cochrane, which transported the Freedom Expedition Force of Peru.

In response, Peru's Viceroy mobilized a fleet in  1791 entailing the Spanish frigate "Esmeralda" with 13 other ships and 32 gunboats, to challenge the Chilean squadron.

During the night of November 5th and the dawn of November 6th 1820, forces led by Admiral Cochrane penetrated the Peruvian Bay of El Callao. In a daring action they captured the frigate "Esmeralda" and a "four-gun" ship successfully taking them out of the harbour under heavy battery gunfire. 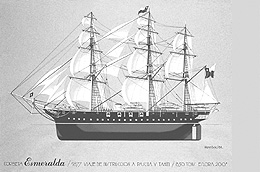 The second ship named "Esmeralda" was a corvette and was named in honour of the frigate captured by Lord Cochrane. Its construction was begun in December 1854 in the Enrique Pritchard shipyards of Northfleet, located in Kent, England.

.During the course of the war against Spain, under the command of Juan Williams Rebolledo, this particular "Esmeralda" captured the "Virgen de Covadonga" during the Naval Action off Papudo, on November 26th 1865.

On May 21st 1879, she faced the Peruvian ironclad monitor "Huascar" at the Naval Battle of Iquique. Despite the overwhelming superiority of the enemy forces, the "Esmeralda" fought for over three hours until she was sunk with her flag nailed a top her mast as an act of defiance to her surrender and that of her crew. During the battle, the Captain of the "Esmeralda", Commander Arturo Prat Chacon, in a heroic attempt to seize the enemy ship leaped aboard the deck of the attacking "Huascar", where he was killed by rifle fire.
This heroic act served as inspiration to the rest of the nation boosting the moral of the Chilean naval and army forces to a level that lead to their victory of the Peru-Bolivian Confederation conflict. 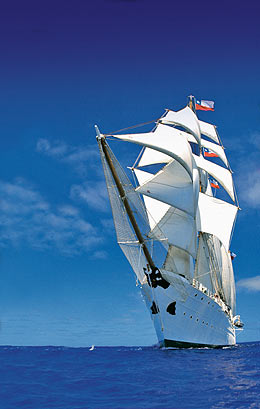 The third ship to carry the name "Esmeralda" was built in 1884 in England. It was the world's first protected cruiser and, at that time, the fastest. It was also the first steam warship with no sails. Its design revolutionized naval architecture and became the model for the building of all cruisers, and subsequent battleships, from that point onwards. It was sold in 1895 to the Japanese Empire who renamed it "Idzumi".

The fourth ship to inherit the name "Esmeralda" was built in 1896 in England. It was considered one of the most powerful cruisers of its kind in the world, incorporating the most recent technological innovations of that time.

The fifth ship to carry the name "Esmeralda" was the former River class HMCS "Glace Bay", ex-"Lauzon", built in 1944 in Canada. This ship was purchased from the Royal Canadian Navy on 30 March 1946. In 1952, when the Chilean Navy acquired the four-mast barquentine, that is the current Training Ship "Esmeralda", her name was changed to "Baquedano".

The fifth ship to carry the name "Esmeralda" was the former River class HMCS "Glace Bay", ex-"Lauzon", built in 1944 in Canada. This ship was purchased from the Royal Canadian Navy on  March 30th  1946. Her name was changed to "Baquedano" in 1952 when the Chilean Navy ac-quired the four-mast barquentine and current Training Ship "Esmeralda".