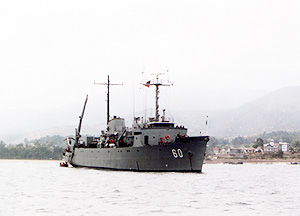 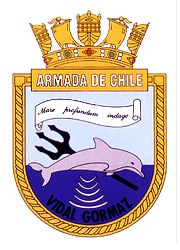 AGOR-60 Vidal Gormaz is the scientific research vessel of the Chilean Navy, built as a USS Robert D. Conrad Class vessel at the Marinette Marine Corp. Yards in the United States.
She was commissioned into the US Navy on September 27, 1965 under the name of Thomas Washington.
On 1966, she was donated to the Scripps Institution of Oceanography of the California University, San Diego, where she sailed more than one million nautical miles during the 26 years of service to the institution.
She was modernized in 1984.
By virtue of the Foreign Military Act, she was bought by the Chilean Navy by means of an intergovernmental agreement.
The vessel was commissioned into the Chilean Navy on September 28, 1992 at San Diego, California, according to the Resolution C.J.A. Nº 4520/B-1301 of September 23, 1992, and arrived at Valparaí­so on December 3, 1992.
She is the second vessel of the Chilean Navy to be named after the notable Commodore Francisco Vidal Gormaz (1837 - 1907), outstanding hydrographer, astronomer, geographer and writer, who founded the Chilean Hydrographic Office, which today is the Chilean Navy Hydrographic and Oceanographic Service (SHOA by its initials in Spanish).
The acronym AGOR stands for Auxiliary General Oceanographic Research.
The equipment of this vessel meets the requirements for research in the fields of physical oceanography, geophysical, geological and chemical surveys and research. She is equipped with three complete laboratories; one sea beam SONAR, which is designed to obtain data from the seabed at depths down to 11250 meters; three winches; two lifting davits, able to perform sampling down to 6000 meters; one 3000 kg A-type crane, and material necessary for general oceanographic sampling procedures.
The vessel is able to operate in all oceanic zones and do research voyages for up to 35 days without resupplying.
Compliment is composed of 8 Navy officers and 32 seamen, plus 15 civil researchers.
Upon her arrival at Chile, the vessel has sailed more than 150000 nautical miles, with more than 17000 hours of marine-scientific work, with remarkable participation in the following investigation programs: "Tropical Ocean Global Atmosphere", "World Ocean Circulation Experiment", "El Niño South Oscillation", "Marine Scientific Research Voyages in National Fiords and Oceanic Islands". The annual program of research voyages can be checked at www.shoa.cl
She currently takes part in projects funded by FONDECYT (acronym in Spanish for National Fund of Scientific and Technologic Development) and FONDAP (National Fund for Development of Primary Areas). Notable researchers of the SHOA Institute, the University of Valparaíso, the University of Concepción and scientists from the country and abroad have traveled aboard the Vidal Gormaz.
From the beginning of her operations in Chile, the Vidal Gormaz AGOR Vessel has collected invaluable oceanographic information from geographic areas which had never been investigated before, areas which play an important role in the development of the country. The fishing industry, aquaculture, agronomy, tourism and pharmaceutical industries, among others, are the ones which are specially benefited from the research this vessel performs.