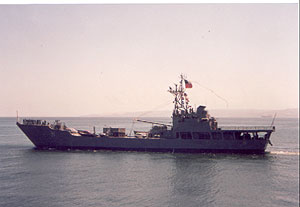 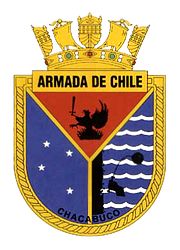 This is an LST Barge, built to the Chilean Navy by the Industrial Plant at ASMAR in Talcahuano.
She was put on slipway on April 6, 1984 and was launched on August 16, 1985.
This unit was built according to French Navy's Batral Class plans, with a prior agreement between Chilean and French governments.
On May 27, 1986, the National Flag was raised on board this ship, at the ASMAR Dock in Talcahuano.
The ceremony was presided over by the Governor of the VIII Region, Brigadier General Eduardo Ibáñez Tillería and the Chief of Naval Services, Vice-Admiral Sergio Sánchez Luna. Her first Commanding Officer was Captain Alfredo Giuliano Ramírez.
On September 9 of the same year, the Marine Corps Legión gave this ship a Combat Flag.
From the moment this ship was commissioned into the First Naval Zone Command, she has been subordinated to the Amphibious and Naval Transport Commando.
During her comisión, she has carried out different duties as an amphibious transport, in institutional and joint exercises with other Armed Forces branches,as well as with the US Navy through Operation Unitas.
Likewise, she has permanently supported community, emphasizing the transport of cargo and passengers to Robinson Crusoe Island, Easter Island and the XII Region. For the latter region, during the 1995 huge snowstorm, also known as "Terremoto Blanco" (White Earthquake), she transported 6,700 grass bales, which were sent to alleviate the difficult situation experienced with goats and sheep.
By April 2000, she had sailed 328,604 nautic miles, from Arica to Cape Horn, and to insular territories, which equals to 15.1 trips around the equatorial line.