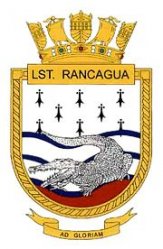 This is an LST 92 Barge, built to the Chilean Navy by the Industrial Plant at ASMAR in Talcahuano. This unit was built according to French Navy's Batral Class plans, with a prior agreement between Chilean and French governments.
She was launched on September 26, 1981.
She was named on March 26, 1982,and her sponsor was Mrs Teresa Adriazola de Poisson, Chief of the Navy General Staff, Vice-admiral Maurice Poisson Eastman's wife. It was officially delivered to the Chilean Navy on August 8, 1983, and commissioned to the Third Naval Zone.
Her first Commanding Officer was Commander Guillermo Valenzuela Goudie.
During her commission into the Third Naval Zone Command, she actively participated in various tasks, such as trips to the Chilean Antarctic Territory, the construction of the Crossing of the Seas monument at Cape Froward, and different community support duties along the national coasts.
On March 22, 1993, after operating for 10 years on southern seas, the LST 92 Rancagua was commissioned into the Amphibious and Naval Transport Commando, which base port is Valparaí­so.
Nowadays, this barge is one of the main transports the Chilean Navy has in order to perform amphibious operations and Marine Corps troop transport, as well as the transport of cargo and passengers, for what she has had to sail along the national coasts, including insular territories such as Easter , Sala y Gómez and San Félix Islands; and Juan Fernández Archipielago.