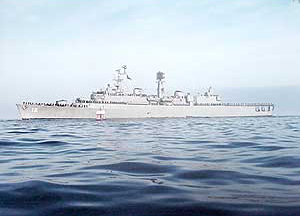 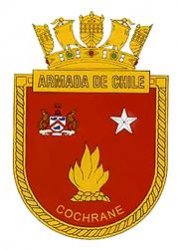 This ship was previously called HMS Antrim, and owned by England. Her keel was put on January 20, 1966 at the Fairfield S. B. & Eng. Co. Ltd. Shipyards in Govan, and commissioned into the Royal Navy on July 14, 1970.
It was commisioned into the Chilean Navy on June 22, 1984 at the Portsmouth Inlet, England. Her first commanding officer was Captain Adolfo Cruz Labarthe.
It was named after illustrious British seaman, Admiral Lord Thomas Alexander Cochrane, who was in charge of the Chilean squadron that disputed their right to the sea against the Spaniards, during the Independence War.
The first port this ship arrived was Coquimbo, on September 9, 1984; at that place , the Commander in Chief of the First Navy Zone along with a commission of inspectors embarked, and while they were in transit to Valparaíso, they evaluated the operating capacity of the ship in order to define her further modifications, which would be carried out at the Asmar Shipyards in Talcahuano. On the next day, September 10, 1984, the ship arrived in Valparaíso, where it was welcomed by the Commander in Chief of the Chlean Navy, Admiral José Toribio Merino Castro.
After a modification process at Asmar Talcachuano, from October, 1984 to April, 1985; the ship was added as a new unit to the Fleet on April 29, 1985, when the the Commander in Chief of the Fleet, Vice-Admiral Sergio Sánchez Luna's command pennant was raised.
She has played in a number of operations, such as Unitas, Team Work South, and exercises with friendly navy units.
When this ship was Commissioned into the Royal British Navy, took part in important actions in Grenada and the Falkands; in the latter , she received a 1000- pound bomb impact in the stern toilets; however, the bomb did not explode and was deactivated later.
Moreover, this ship has been visited by illustrous people, such as the Officer of the British Navy Michael Cochrane, Admiral Lord Thomas Alexander Cochrane's descendant, in April 1990 and Princess Anna of Britain in September 1990.
This ship has also taken part in many important events, such as the first joint exercise between Chilean and Argentine warships called "Integración" (Integration),in November, 1998, offshore Chilean coast.
On December 22, 1990, after a restoration and modernization process, this ship turned into Leader Destroyer Helicopter Carrier (DLH),and was fitted out to operate with midsize helicopters from her flying deck. Helicopters first operated from her flying deck in March, 1992.