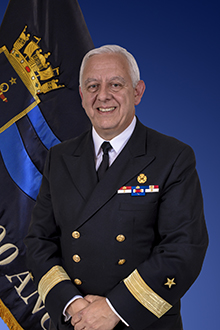 Commodore Sidney Chellew was born in Valparaíso on November 23, 1963. After completing high school at Saint Dominic's in Viña del Mar, he entered the Arturo Prat Naval Academy in February 1980, graduating as a midshipman in December 1985 and ascending to the rank of ensign on January 1, 1987.

He studied at the Naval Polytechnic Academy, where he received a degree in naval mechanical engineering. Later in his career, he graduated with a specialization of chief of staff and obtained a master's degree in naval and maritime sciences and a diploma in upper-level management, all from the Naval War College. He also received a master's degree in business administration from the Universidad del Desarrollo.

During his more than 11 years on board, he served on the training ship Esmeralda, the battle cruiser O'Higgins, and the transport ship Aquiles. He was cargo engineer aboard the barge Rancagua, the fleet tug Leucotón, the missile boat Iquique, and the oiler Araucano.

Among his principal posts on land include: engineering department head of the Logistics Support Center in Iquique; submarine base commander; head of the Acquisitions Department of the Chilean Naval Mission in the United States, head of the Technical Inspectorate of Naval Engineering in the Fourth Naval Zone; assistant director of the Department of Naval Systems Engineering, and, recently, as manager of the Industrial Plant of ASMAR (V).

In academia, he served for five years as a professor of engineering systems at the Arturo Prat Naval Academy.

On December 16, 2016, he became Director of Shipyards and Construction of the Navy, and was sworn in as commodore on the 29th of that month.

He is married to Mrs. Eliana del Pilar Ponce Gutiérrez and they have a 19-year-old daughter, Catalina Margarita.