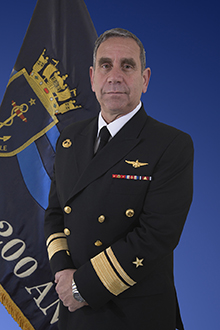 Rear Admiral Ricardo Marcos was born in Viña del Mar on November 15, 1963. After completing his studies at Colegio Seminario San Rafael in Valparaíso, he entered the Arturo Prat Naval Academy, graduating as a midshipman on January 1, 1985.

He is a specialist in chief of staff and naval aviation. Furthermore, he graduated from the course in Command and Chief of Staff given by the Naval War College of Argentina. He holds a master's degree in naval and maritime sciences with a specialization in strategy; he also holds the professional title of military professor of political strategy.

After completing his specialization, he distinguished himself in the field of naval aviation, initially as a squadron pilot of VC-1 general transport, flying C-212 and C-95 planes. Later, he worked in the aeromaritime exploration squadron as pilot of P-111 and P-3 ACH airships.

During his years of service aboard Naval vessels, he distinguished himself as crew officer aboard the AGS Yelcho, the destroyer Blanco Encalada, the frigate Ministro Zenteno, the frigate Almirante Williams, and at the Squadron Chief Command. He was commander of the missile boat Teniente Uribe in 2004 and of the frigate Capitán Prat in 2008 and 2009. In 2013 he assumed the role of chairman of Chief of Staff of the National Squadron.

Among his principal shore-side posts include his role as dean of studies at the Naval War College; as United Nations military observer at the Cambodian Peace Mission; as naval attaché for the Embassy of Chile in Colombia; as head of the Planning Department in the General Directorate of Services of the Navy; and head of the Department of Planning and Institutional Doctrine of the General Chief of Staff of the Navy.

On December 4, 2015, he became Director of Social Welfare of the Navy and was sworn in as commodore on the 30th of that month.

On December 11, 2017 he assumes as Commander in Chief of the Third Naval Zone.