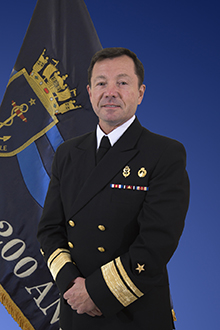 He is a specialist in chief of staff, navigation, and tactical diving. Furthermore, he holds a master's degree in naval and maritime sciences. He also holds the professional title of military professor. And in 2005, he was awarded a diploma in crisis management and strategy from the Naval War College.Rear Admiral Nettle was born on December 9, 1962 in Santiago. After completing his studies at the Colegio San Juan Evangelista in that city, he entered the Arturo Prat Naval Academy, graduating as midshipman on January 1, 1984.

Among his principal shore-side assignments include the Tactical Diving Command, whose commander he became in the year 2005. He also was a member of the Chief of Staff of the Third Naval Zone as assistant head of the Department of Operations in 2004 and as head of the same department in 2008 and 2009. From 2010 to 2011, he was Commander of the Special Forces Command. In 2013, he was designated Head of the Naval Training Center, and in 2014 and 2015 he was chairman of Chief of Staff of the Naval Operations Command.

On December 2, 2015, he became Commander in Chief of the Fifth Naval Zone.