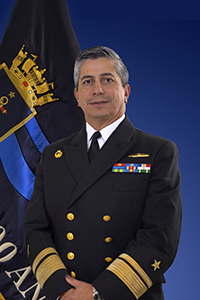 Rear Admiral Miller was born in Puerto Montt on March 28th, 1962. After completing his studies at Colegio San Francisco Javier in his hometown, he joined the Naval Academy, graduating as midshipman on January 1st, 1984.

He is a weapons engineer with a specialization in submarines and holds a master's degree in naval and maritime sciences as well as a diploma in finance and administration from the Maritime University of Viña del Mar.

In 2009, he was appointed as Naval attaché in Brazil.

As Captain, he served as Chief of Staff of the Submarine Force and as Deputy Director of Education of the Navy.

On December 2015, as Commodore, he became the Commanding Officer of the Submarine Force.

On January 1, 2016, the Chilean government promoted him to the rank of rear admiral.

Rear Admiral Miller is married to Mrs. Mercedes Aparicio and is the father of three children: Paulette,