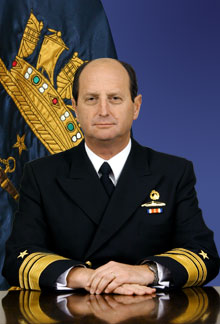 Vice Admiral Francisco J. Guzmán was born in Valparaíso on 8 June 1955. After completing his studies at the Sacred Heart School, Manquehue, in Santiago, he entered the "Arturo Prat" Naval Academy.

In 1974, he graduated as Sub Lieutenant from the Academy and navigated in the annual voyage of the Training Ship "Esmeralda". Later, he was assigned as a Navigating Officer aboard the LSM "ELICURA" in Chile's Southern channels; he was later Instructor to Midshipmen aboard the Training Ship "Esmeralda" to continue in 1978 as an Instruction Officer at the "Arturo Prat" Naval Academy.

In 1994 he graduated as Staff Officer and in 1995 he received the Master of Science Degree in Naval & Maritime Affairs with a major in Strategy; in 1998 he became a graduated in the High Command Course of the National Academy for Political and Strategic Studies.

In the educational field, he has been a Military Professor at the Naval Academy, the Submarine School and at the National Academy for Political and Strategic Studies.

In 1981, he received his identification badge as Submarine Officer, beginning his specialty. In 1982, he was assigned to the SS "Hyatt"; and, in 1984, he was part of the first crew on board the SS "Thomson" in Germany. Since then, he has been appointed to different submarines of "209" and "Oberon" class, assuming different duties on board. On shore, he has been Head of the Operations Department of the Submarine Forces, Deputy Director and then Director of the Submarine School.

He was Training Commander of the Submarine Forces during 1997 and 1998. Between 1999 and 2000, as Maritime Governor, he assumed as Commander of the Beagle Naval District at the southernmost area of Chile, and at the same time, as Commandant of the patrol gunboat units at the South of Chile.

During his years afloat, he served on board Patrol Ship "Lautaro" in 1991 participating in two Antarctic Campaigns; SS "Simpson" from 1995 to 1996 participating in the naval exercise "RIMPAC 96" in Hawaii and on the US West coast. He was also assigned to the Commandant of the patrol gunboats units, located in Puerto Williams, in 1999 and 2000.

In 2001 and 2002, he was appointed Naval AttachÃ© at the Embassy of Chile in the United States, and Alternate Delegate to the Inter-American Defense Board, in Washington. Afterwards, he returned to Chile to assume as Deputy Director of the National Academy for Political and Strategic Studies of Chile until December 2004.

Between December 2004 and June 2005, he took office as Deputy Director of the Directorate General of the Maritime Territory and Merchant Marine.

From 21 June 2005, he assumes as Director of the Naval Intelligence.

On 15 December 2007, he assumes as Commander in Chief of Naval Zone Fourth.

On 19th December 2008 he took office as Commander of Naval Operations of the Navy.

On 1st January 2009, the Supreme Government promoted him to Vice Admiral

He is married to Ana María Lazcano and they have 4 children: Ignacio, Paula, Josefina and Javiera.