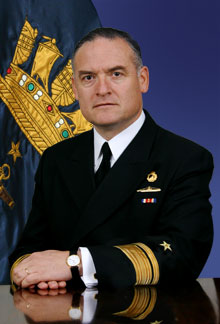 Rear Admiral Macchiavello was born in Santiago on 16th November 1957. He entered the Naval Academy "Arturo Prat" in 1973 and was commissioned an Ensign on 1st January 1977, being designated to the Training Ship "Esmeralda".

He is a Staff and Submarine officer. He holds the professional degree of Weapons Engineer with a major in Submarines and the academic degrees of Bachelor's in Naval and Maritime Sciences from the Naval Poly-technical Academy and a Master's in Business Administration from the University of Concepcion. Additionally, he holds a Diploma in Shipping from the Universidad Maritima de Chile and the degree of College Military Professor, with a major in Submarines. In the education scope, he has filled duties as Assistant Professor of the Logistics and Tactics Professorships of the General Staff courses at the Naval War College, and Professor of Submarine Warfare for the Naval Warfare Elementary and Intermediate specialty courses for Officers.

For his more than fifteen years of seagoing appointments, he has served in barge LSM "Elicura" and AGS "Yelcho" Tug boat, destroyer APD "Serrano" and Submarines "Hyatt" "O´Brien", "Thomson" and "Sympson".

He was Commanding Officer of Tug boat ATF "Colo-Colo" in 1994, and submarines SS "Hyatt" in 1997 and SS "O´'Brien in 1998. As from 2004 to 2005 he took office as Commander, Beagle Naval District and Port Authority in Puerto Williams and the Chilean Antarctic.

Amongst his shore duties, it is worthy mentioning his position as Head of the Operations Department, Submarine Force; Deputy Director and then Director of the "Almirante Allard" Submarine School; Instructor and then Deputy Chief of the Navy Tactical Training Center. In 1996, he was part of the Navy General Staff in Valparaiso.

In 2001 he was Chief of General Staff of the Submarine Force. From 2002 to 2003 he was Naval Attaché to the Chilean Embassy in Argentine, Uruguay and Paraguay; as from 2006 through 2007 he took over as Deputy Director of Naval Intelligence.

On January 1st of 2008, the Supreme Government promoted him to Rear Admiral.

On January 4th he took office as Deputy Chief of General Staff of National Defense.

On December 22th of 2009, he assume as Commander in Chief of the Second Naval Zone.

He is married to the former Cecilia Poblete and they have four children: Roberto, Francisco, Carmen Cecilia and Pablo.