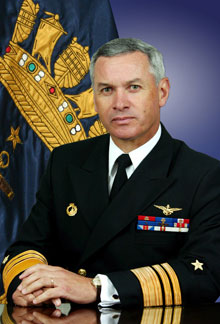 Vice Admiral Gonzalez was born in Valparaíso on 24th June 1958. After studying at the Sacre Coeur in Viña del Mar, he entered the Naval Academy "Arturo Prat" in 1973 and was commissioned an Ensign in January 1978.

He is a Naval Aviation specialist and holds the professional degree of Weapons Engineer with a major in Naval Aviation and he is a Staff Officer. He holds a Diploma in Administration and Finance.

Throughout his years of sea service, he has served in PTF-83 "Tegualda", APD "Orella", APD "Serrano", DLH "Almirante Cochrane" and LST "Chacabuco". His seagoing command posts have been on board PSG "Contramaestre Ortiz" in 1996, AP "Aquiles" in 2001 and AO "Araucano" in 2006.

His air naval career has been held on the HA-1 Helicopter Squadron and Helicopter Detachment embarked on the FLEET, being Aircraft Commanding Officer of Bell UH57B, Alouette III and Cougar.

As from December 17th of 2007, he took over as Director of Navy Education.

On December 28th of 2007 he was promoted to Commodore.

On January 1st of 2009 the Supreme Government promoted him to Rear Admiral.

On November 25th of 2009 he took over as Commander in Chief of the Third Naval Zone, in Punta Arenas.

On December 23th of 2010, he took over as South Joint Command, in Punta Arenas.

On January 1st of 2011, the Supreme Government promoted him to Vice Admiral.

He is married with María Carolina Möller and they have three sons: Rafael, Francisco and Pablo.