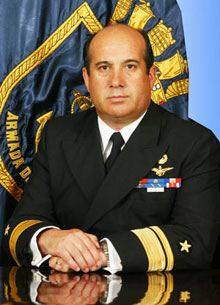 Rear Admiral Torres was born in Valparaíso on 23rd June 1955. He entered the "Arturo Prat" Naval Academy in 1971 and was commissioned an Ensign on 1st January 1976.

Amongst his shore duties, we can highlight his performance at the Third Naval Zone Staff in 1994 and Commander of the Beagle Naval District and Port Authority in Puerto Williams in 2002 and 2003.

On 26th December 2005, he took over as Director, Navy Social Welfare.

On 30th December 2005, he was endowed with the Commodore rank.

On 16th December 2008, he took over as Commander in Chief of Naval Zone First.

He is married to the former María Soledad Henriquez and they have two children: Alfonso and Soledad.