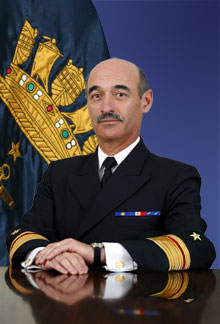 Rear Admiral (Health) Luis Felipe Huidobro was born in Valparaíso on 30th January 1955. His elementary and higher education took place in different establishments, amongst them the "Arturo Prat" Naval Academy from 1970 through 1972, graduating from Liceo Nº 2 in Recreo, Viña del Mar.

He studied Medicine at the University of Chile, graduating with the degree of Surgeon on 4th January 1980. On 2nd June 1980 he entered the Naval Academy with the rank of Lieutenant (Health).

In April 1983 he was posted to Santiago, where he took up his major scholarship at the University of Chile Clinical Hospital, and majored in Internal Medicine in April 1986. He also studied Health Programming and Appraisal and Hospital Management.

He is married to the former Maria Rosa Salazar and they have two children, María Gabriela y Juan Felipe, and two grandoughter, Santiago and Beatriz.