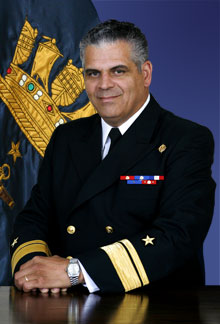 He was born in Santiago on 25th May 1956. After studying at the San Ignacio School, he entered the Naval Academy "Arturo Prat" and was commissioned an Ensign on 1st January 1977.

He is a Littoral specialist and holds a Bachelor's in Science degree. In 1987 he passed the Naval Control of Shipping course. In 1991 he followed the Intelligence course at the Naval War College. He owns a Diploma on "Managerial Development" from the Adolfo Ibañez University (1997).

On 1st January 2002, the Supreme Government promoted him to Captain, filling duties in the Chilean Naval Mission in London, as Chilean regular representative to the International Maritime Organization and Naval Attaché.

In 2003 he was elected Vice President of the Sub Committee for Hazardous Commodities, Solid Cargo and Containers, International Maritime Organization, position held up to date.

On 17th December 2007, he took over as Director Maritime Security and Operations.

On 1st January 2008, the Supreme Government promoted him to Rear Admiral LITT.

He is married to the former Ana Maria Killing and they have four children: Francisca, Juan Pablo, Jose Ignacio and Bernardita.