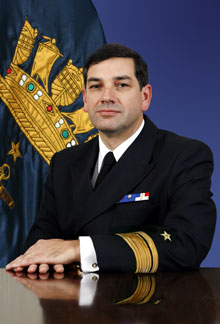 He was born on 23rd July 1958 in Santiago, Chile. He spent his early childhood in the countryside and in 1964 he joined the San Ignacio School el Bosque in Santiago. He entered the Naval Academy "Arturo Prat" in February 1973, being part of the 1978 generation.

Upon graduation from the Operations School in 1983, he was part of the development and construction project of the simulator in the Tactical Training Center, where he remained until 1993, as part of the crew.

As from September 1983, he was part of the Directorate of Weapons staff, where he filled duties as Chief of the Development Department, leading projects for the Development of Fire Control Systems for Missile Crafts and Frigates, Electronic Warfare systems for Frigates and Submarines. From 2000 though 2001 and was Head of the Operations Department of the mentioned Technical Division.

He is married to the former Valentina Campos and they have 6 children: Juan Eduardo, Martin, José Tomás, Valentina, Raimundo and Trinidad.

On 18th December 2008, he took over as Director of Naval Systems Engineering.

On 1st January 2009, the Supreme Government promoted him to Rear Admiral.