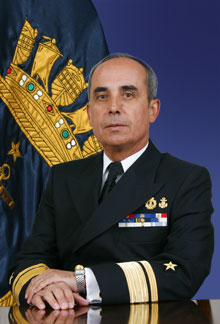 Rear Admiral MC del Real was born in Santiago on 15th December 1952. In 1969 he graduated from high school at the Notre Dame School in Santiago. From 1970 to 1973 he studied at the Catholic University in Valparaiso, period where he performed his Compulsory Military Service, being student of the Marine Corps, graduating in 1972 as Ensign Reserve MC. Afterwards, he definitively entered the Navy, graduating as Marine on 1st January 1976.

He is a Staff and Marine Corps officer. He holds the professional degree of Weapons Technician Engineer in Amphibious Systems and the Academic Degree of Master's in Naval and Maritime Sciences with a major in Strategy. In 2004 he graduated as College Professor. He is a graduate from the National College of Political and Strategic Studies at the Hemisphere Defense Studies, National Defense University in the USA.

In 1991 he was commissioned as UN Middle East Observer, performing as UNTSO - OGL at The Lebanon.

On 20th December 2007 he took over as Commandant General Marine Corps.

On 31st December 2007 the Supreme Government promoted him to Rear Admiral MC.

He is married to the former Maria Nerli del Real and they have 4 children.