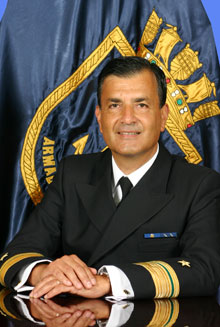 Rear Admiral Cereceda (Justice) was born in Santiago, Chile on 11th October, 1955. He attended High School at the Sacre Coeur School in Viña del Mar. He entered the Navy, Justice career, as Lieutenant on 15th May 1983.

During the two former positions, he participated in different stages, negotiating a variety of significant transactions for the procurement and financing of warfare equipment.

On 20th December 2006, he became the Chilean Navy Judge Advocate General and on 1st January 2007 the Supreme Government promoted him to Rear Admiral.

He is married to the former Inés María Letelier and they have two daughters: Maria Paz and Constanza.