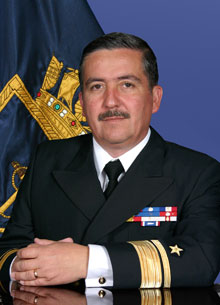 Rear Admiral was born in Santiago on 9th October 1959. After studying at the Instituto Nacional in Santiago and UTFSM School, he entered the Naval Academy "Arturo Prat" and was commissioned and Ensign on 1st January 1977.

Throughout his years of seagoing appointments, he has filled duties in the Fleet Oiler AO "Araucano" and Destroyer DDG "Almirante Williams".

Amongst his shore duties, we can highlight : Head of the Experimental Division on Electronic Warfare, Directorate of Navy Weapons; Chief of Upgrading Fleet Hard and Soft Kill Systems and Head of Works Inspectorate in Israel, Upgrading Hard Kill Project, depending on the Olimpo Directorate of Programs; Chief of Inspectorate, Directorate of Weapons, Asmar Facilities (T); Fleet Units Renewal Program, Navy Directorate of Programs, Research and Development, Chief of Weapons Systems, Head of Project and responsible for the transfer of Frigates FF "Blanco" and FFG "Latorre" in The Netherlands and in 2006 as Deputy Director Director General of Services, Chilean Navy.

As of 29th December he was promoted to Commodore, performing as Director Navy Units Refitting.

On 19th December 2007, he took over as Director Programs, Research and Development, Chilean Nay.

He is married to the former Fabiola Barbieri and they have four children: Sebastian, Cristobal, Renata and Antonia.