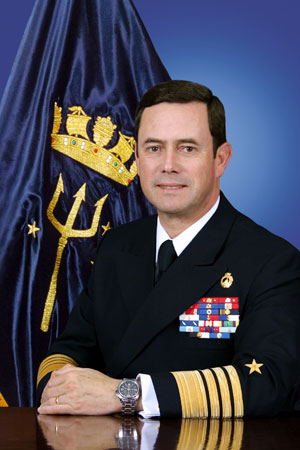 Admiral Edmundo Gonzalez was born in Valparaiso on 17th April 1956. After studying at the "Mackay School" in Viña del Mar, he joined the Naval Academy "Arturo Prat" and was commissioned an Ensign on 1st January 1975 to perform the XXth Instruction Cruise on board the Training Ship "Esmeralda".

Amongst his shore duties, we can stand out his position as instructor at the Seaman Apprentice School "Alejandro Navarrete Cisterna" and at the Navy Weapons School; Aide to the Minister of National Defense; HQ Commander-in-Chief Fourth Naval Zone; Deputy Director Naval Academy "Arturo Prat"; Secretary to the Commander-in-Chief of the Navy and Professor of the Naval War College, Chief of Professorship and finally Director.

Amongst his overseas postings, we can stand out his position in the Strike Craft Flotilla Training School at the South African Navy and as invited and concurrent research professor of the Strategic Research Program at the US Naval War College.

As from 23rd December 2003 he filled duties as Deputy Chief Navy General Staff.

On 1st January 2005 the Supreme Government promoted him to Rear Admiral.

On December 2006 he took over as Commander in Chief of the Southern Military Region, with HQ in the city of Punta Arenas, being the first Navy Officer to be appointed to this command.

On 1st January 2008 the Supreme Government promoted him to Vice Admiral and he took over as Director General of the Maritime Territory and Merchant Marine.

As from 18th June 2009 he was promoted to Admiral and took over as Commander-in-Chief of the Navy.

Admiral Gonzalez is married to the former Patricia Corssen and they have five children.