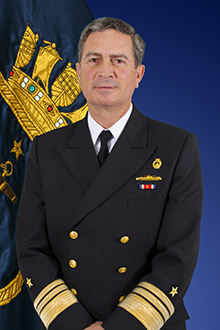 Rear Admiral Schwarzenberg was born in Valparaíso on December 06, 1958. After completing his formal education in Colegio Alemán, he attended the Arturo Prat Naval Academy and he graduated on January 01, 1980.

He is a specialist in submarines, General Staff Officer, Weapons Engineer with a specialization in submarines. He has a master's degree in naval and maritime sciences and he graduated from the Naval War College.

Throughout his career, he has been at sea for over 16 years in different combat and support units, such as the Training Ship Esmeralda, Transport Ship Aquiles, Submarines Hyatt, Simpson, O'Brien and Thomson. He has been Commander aboard the General Service Patrolling Boat Aspirante Morel, Submarine Thomson and Training Ship Esmeralda.
On land, he has been Division Officer at the Naval Academy, Commander of the Submarine Base, Head of the Talcahuano Training Center, Head of the Department of Seamen of the Naval Personnel Command, Director of the Arturo Prat Naval Academy and Head of the Human Resources Department of the Chilean Navy.

On November 26, 2010, he was invested as Commodore and he became the Commander in Chief of the Submarine Force.

On January 11, 2011, the Chilean Government granted him the promotion to Rear Admiral.

On November 30, 2012, he was sworn in as Commander in Chief of the Second Naval Zone.

On December 15, 2014, he became General Director of Merchant Marine and Maritime Territory.

On January 01, 2015, The Chilean Government granted him the promotion to Vice Admiral.

He is married to Mrs. Paula Klein Echeverría and he is the father of three children: Josefina, Martín and Tomás.