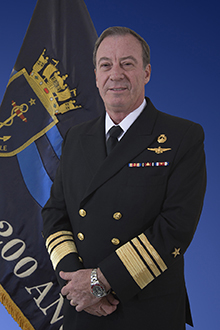 Vice Admiral Rivera was born in Viña del Mar on April 11th, 1961. He graduated from the Naval Academy in January 1981 as midshipman.

In 1987, he became a Naval Aviator and in 1997 he graduated from the General Staff course at the Naval War College. In 2001, he received a Master of Science in naval and maritime affairs, specializing in strategy.

He served aboard for more than 14 years in different units from the fleet becoming Principal War Officer of destroyers and frigates.

Later, in 1997, as lieutenant commander he was appointed as commanding officer of the PSG Piloto Sibbald.

As commander, he commanded the frigate Ministro Zenteno. In 2007, he became the first commanding officer of the Type 23 frigate "Almirante Lynch".

During his years of shore duty, he served in the HS-1 Helicopters Squadron; at the Naval Aviation Flight School; at the Naval Operations Command; as naval attaché in Ecuador; as Secretary to the Commander in Chief; and as Department Head of Planning and Institutional Doctrine at the Navy Chief of Staff.

On November 22nd, 2010, the Commander in Chief of the Navy appointed him as commodore and became Deputy Chief of Staff of the Navy.

On December 1st, 2011, he became Commander of the Third Naval Zone, stationed in Punta Arenas.
On January 1st, 2012, he was promoted to the rank of rear admiral by the Chilean government.

On November 30th, 2012, the Commander in Chief of the Navy appointed him as Commanding Officer of the Fleet.

In 2014, he assumed as Deputy Chief of Staff of the Navy.

On January 1st, 2016, he was promoted to the rank of vice admiral by the Chilean government and became Chief of Naval Operations.