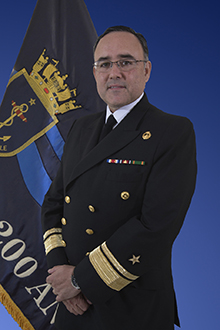 Rear Admiral Rodrigo Vega was born in Santiago on 16 April 1964. He entered the Arturo Prat Naval Academy in 1980 and was commissioned as a Midshipman in January 1985.

Rear Admiral Vega's shore assignments include tours at the Navy Weapons Directorate; the Third Naval Zone Headquarters; the Directorate of Programs, Research and Development of the Navy; the Chilean Naval Mission in London (as Deputy Head and later Head of the Technical Inspection Office for the Type-23 Procurement Project "Puente III"); the Naval Staff; and at the Directorate General of Logistics of the Navy (as Deputy Director).

On 7 December 2016, he assumed his present position as Director General of Finance of the Navy.