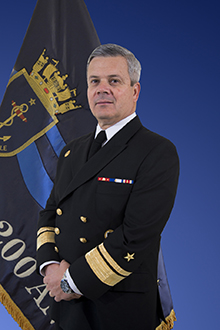 He has a Bachelor in Science of Engineering degree with a major in Electronics and a Master of Science in Maritime Affairs from the Chilean Naval War College.Rear Admiral Gómez was born in Santiago on April 9, 1965. He completed his primary and secondary education in Valparaíso and Viña del Mar. He joined the Naval Academy in 1981 and graduated as midshipman in January 1986.

He also completed the Naval Command College course at the United States Naval War College in 2008 and the Combined Forces Maritime Component Command (CFMCC) course at the US Southern Command in 2016.

He has served more than 17 years aboard many different Navy units, including the Patrol Torpedo Boat "Fresia", the missile boats "Covadonga" and "Orella", training ship "Esmeralda", among others.

RADM Gómez has been selected for command six times. As lieutenant, of the Patrol boat "Quidora". As Lieutenant Commander of the "Grumete" Patrol Boats flotilla and the missile boat "Teniente Orella". As Commander, he commanded Northern Missile Boats Flotilla and the frigate "Almirante Latorre". Finally, as Captain, he served aboard the frigate "Almirante Condell" in 2011.

In December 2015, the Commander in Chief of the Navy selected him to become Director of Human Resources of the Navy.

On December 12, 2016, he assumed as Commander in Chief of the Second Naval Zone.

On January 1, 2017, the government promoted him to the rank of rear admiral.