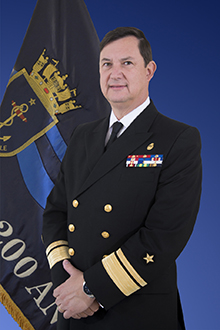 Rear Admiral Sánchez was born in Santiago on August 17, 1962. After completing his studies at the Colegio Tabancura, he entered the Arturo Prat Naval Academy, where he graduated as midshipman on December 19, 1982.

He is a specialist in chief of staff and navigation systems. He holds the professional title of weapons engineer with a specialization in navigation systems as well as a master's degree in naval and maritime sciences. He also holds the title of military professor of naval operations. In 1994, he completed the International Principal Warfare Officer course given by the Royal British Navy in Portsmouth, England. In 2004, he completed the course in Joint Chiefs of Staff at the Joint Forces Staff College in Norfolk, Virginia.

He has served aboard Navy units for more than 21 years. In 1983, he participated in the instructional cruise aboard the training ship in Esmeralda. He also distinguished himself on the oiler Araucano, the barge Rancagua, the transport ship Aquiles, the frigate Ministro Zenteno, and the destroyer Prat. He was commander of the auxiliary oiler Guardian Brito in the austral zone in 1989 and 1990, the missile boat Orella in 2002, the Northern Missile Command in 2003, the missile frigate Lynch in 2006, and the class-23 frigate FF Lynch in 2009.

Among his principal posts on land include his role as liaison officer at the United States Navy Fleet Forces Command in Norfolk, Virginia. In 2007 and 2008, he was designated as combined operations officer in the Naval Operations Command and in 2010 he was head of the Navy's Training Center.

Between November 19, 2010 and November 17, 2014, he was head of the Planning and Institutional Doctrine Department of the General Chief of Staff of the Navy. During that period, he participated in the 2012 RIMPAC exercise as Sea Combat Commander (commander of the work group 170.1) of the Battle Group aboard the USS Nimitz (CSG-11). In 2014 he was designated Second Commander of the Maritime Component (DCFMCC) in the 2014 RIMPAC exercise, carried out in Hawaii.

On November 24, 2014, he became Commander of the Fourth Naval Zone.

On December 15, 2017 he assumes as Director of Operations and Joint Conduct of the Joint Chiefs of Staff.