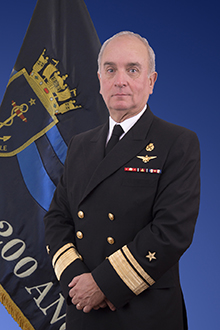 He is a specialist in General Staff and Naval Aviation. He has a Master's Degree in Naval and Maritime Sciences. He also graduated from the 'Command and General Staff' course at the Naval War College in Peru in 2003.

He has been on board of the Training Ship Esmeralda, Boat Orompello, Oil Tanker Guardian Brito and Destroyer Cochrane in the Fleet. In Naval Aviation he has served in the Anti-submarine Squadron HS-1, General Purpose Helicopter Squadron HU-1, Attack Helicopters Squadron HA-1, with a flying experience of over 3000 hours. He was a flight instructor for helicopters such as Bell 206, BO - 105 and Cougar AS-332. He was the first Chief of the helicopter detachment assigned to the Fourth Naval Zone in Iquique in 1991 and 1992 and he was the Commander of the Attack Helicopters Squadron in 2007 and 2008.

On January 01, 2016, the Chilean Government granted him the promotion to Rear Admiral.