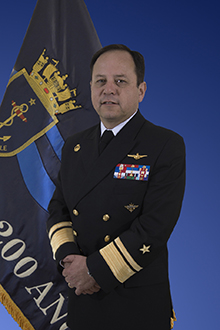 Over the years, he has served in the following naval units: the cutter Sargento Aldea, the training ship Esmeralda, the Fleet of HS-1 Antisubmarine Helicopters, the Second Aeronaval Force, the Fleet of HA-1 Attack Helicopters, the frigate Almirante Lynch, and the oiler Araucano.Commodore Carlos Fiedler was born in Viña del Mar on February 27, 1964. After completing high school at Colegio Alemán of Valparaíso, he entered the Arturo Prat Naval Academy, graduating as a midshipman in December 1985.

He has commanded the following units: the barge Elicura, the ocean patroller Policarpo Toro, the training ship Esmeralda, and the Fleet of HA-1 Attack Helicopters.

Among his posts on land, he has served as dean of studies at the Naval War College; in the Navy's Programming, Investigation and Development Directorate; in the Chief Command of the Fourth Naval Zone; in the Naval Aviation Command; and in the General Chief of Staff of the Navy.