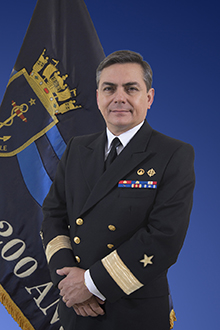 He is a Specialist in Seacoast Littoral and an Engineer in Maritime Administration. In 2004, he completed the Staff Information Course (CINFO) at the Naval War College. Commodore Solar was born in Viña del Mar on January 10, 1963. He joined the "Arturo Prat" Naval Academy in 1981, and he graduated as Midshipman on January 01, 1986.

On December 04, 2017, he was appointed Director of Security and Maritime Operations.